“Have you heard of Witesnake’s ex-guitarist Doug Aldrich? Well me and Paul met him and each other at the 1st Guitar masterclass of the Academic Year that was held when we were 1st in London. While chatting to Paul, waiting to see this rockstar, I found out that he liked similar music to me and was a kind and chill guy. Later I also heard his great guitar skills, so here are some tips he has to share.” – Neli

How would you describe your journey as a musician so far – where it started and how you got where you are now?

I started playing guitar at 15, mostly because I really wanted to play those AC/DC riffs, but also because I hoped it would improve my dating game (sigh). I really didn’t think much of it until I got my first electric guitar a year later. Hearing the sound of a distorted power chord seemed to move something within me and refocus my objectives, as I soon began regarding it as possibly more than just a hobby.

Practice hours grew longer and I eventually ended up enrolling on a degree in guitar performance at ICMP London. After graduating and returning to my home country of Romania, I found myself making musician friends and slowly getting into the local music scene, playing with several Romanian artists and function bands.

I soon joined a cruise ship party band and embarked on a 6-month contract, during which I got the chance to hone my skills by playing daily. Now I’m back home, trying to maintain a balance between gigs and writing music for video games.

What equipment do you use that has been crucial to your becoming a successful musician?
I think each musician, at some point in their lives, stumbles across an instrument they truly bond with. In my case, that happened with a custom-made headless Kiesel Zeus. It just works perfectly for me, its sound and ease-of-play make it seem as a natural extension of my hands.

Concerning amps, as much as I enjoy the endless sonic possibilities of digital sound and plugins, I always prefer tube amps when playing live. There’s something about the true string response you get, a very clear dynamic feedback from your touch, which I think is a crucial aspect of an enjoyable performance.

Having years of experience, how do you personally set goals for the continuous development of your guitar skills?
I don’t really set goals anymore, at least not in the strict, checklist-like sense of earlier days. I simply ask myself what type of sound I’d like to explore, and then I try to see the different paths leading there. Sometimes I struggle, other times the process unveils itself effortlessly. Coming to terms with this made a huge difference in my perception of what good learning habits are. 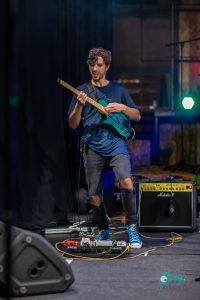 You are a part of several bands. How do you approach collaborating with other musicians?

I don’t think too much about it. Most of my musical collaborations have been with friends or people whose company I enjoy, and things tend to come naturally. When this doesn’t happen, I think patience, awareness of personal boundaries, and empathy towards fellow musicians go a long way in maintaining a pleasant environment for everyone to play in.

What is your approach to playing a great solo?

Accepting that it might not even be a great solo! What even IS a great solo? I found that starting to play with the expectation of something great really does alter your capacity to honestly express what you’re hearing. So it’s more of a process of listening carefully to what others are playing, drawing inspiration from them and allowing that to create a medium for your own ideas to come to light.

In addition to gigging, you also teach guitar. What is something you learned about the guitar from the perspective of a teacher?

Teaching, and teaching children especially is a profound learning experience in itself. One thing of great importance is constantly finding ways to inspire your pupil, by discovering exactly what it is that compels their musical curiosity and stimulating it with exercises that feature an element of personal exploration. Depending on the type of learner, the guitar can be an aural, visual or kinesthetic tool to developing musicality and I believe it is your responsibility as a teacher to figure out the best way to frame it.

And what is something you insist on your students knowing?

That their musical imagination is as worthy as anyone’s, and that their potential is only as great as their desire to learn how to tap into it!

What is a thing you’d like to experiment with in music?

I find the deepest satisfaction in the state of pure contemplation. Imagine beholding a grand scenery of nature: my everlasting experiment is to try to achieve the same degree of abundance when composing or playing, and this ties in to many other aspects of my life. When purposefully pursued, this experiment unveils itself as a never ending source of new material, as you learn to take inspiration from all that surrounds you and, in the process, hopefully becoming yourself inspiring to others.

In more pragmatic terms though, I’m currently working on a project that attempts to meld neo-soul vibes with video-game music and reactive visuals. To take the experiment further, I’m planning to release it as an NFT in order to test new music revenue models and support art decentralization.