“Jay Stapley is someone from whom I learned a lot. I first met him during my 1st year at Music University where he taught a Songwriting Masterclass and the way he spoke and how he described the songwriting process is something I vividly remember to this day. Then while I was doing my bachelor’s degree, we were going to have a few recording session classes with him. Everybody was warning us about how scary it was going to be and how he is stroppy and what-not! I was petrified that I’d get shouted at (which now seems funny to me 😀 ). I learned the songs, I followed his clear directions and it was actually a very pleasant experience and it gave me the opportunity to see what session work is like. It was a very enlightening experience. So read on below and who knows? Maybe some of his words will stick with you for years to come as well! 🙂 “ – Neli

How did you pick up a guitar and eventually get started as a session musician?

I started playing guitar because my father, who was a music teacher, brought home a Spanish guitar. He wanted to be able to teach it to his students, and I picked it up and learned my first chord and was hooked!

I got into sessions after I moved to London in 1978. I’d been in a band touring the UK and Europe playing small rock clubs and I got tired of being on the road all the time, so I left the band and stayed in London. I told all the musicians I knew (and some I didn’t know!) that I was looking for session work, and someone recommended me to a producer who did a lot of  T.V. advertising music (“Jingles”). He booked me for a session and word got around among the other Jingle producers that I was good. In the space of a year I went from no sessions to 2 or 3 sessions a day! I also used to do any recording work, which I was asked to do, even if there was no fee, because I met lots of people and some of them worked with other musicians/artists who could pay their musicians.

Remember: everything you do has the potential to lead to something else.

In your long career, you have been involved in nearly all aspects of life in the musical industry. Can you tell us a bit about how your path led you in all those directions?

My path went in those directions for reasons including need for money and my own curiosity. In 1981 I had no gigs, no sessions, but a phone call came from Roland UK (the UK branch of Japanese synth manufacturer Roland) who were looking for someone to demonstrate their guitar synthesisers and other guitar products, including Boss pedals. That job led me to learn how to record and produce, which meant that I could always earn money making recordings for other musicians and artists. Being a producer influenced my work as a session musician hugely, because the producer has to see the big picture. 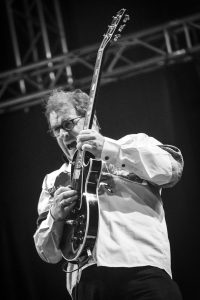 What are some of the positives and negatives of being a session musician?

The positives: playing lots of different styles of music, meeting and playing with the very best musicians, earning enough money to live comfortably,. The negatives: it’s easy to never develop your own ‘voice’ on your instrument because you’re often working to a reference track of someone else’s style. It’s also easy to never learn how to write music, and the secret to survival in the music business is to generate royalty-based income, most of which comes from writing.

How did the session industry change in the course of your career?

Technology changed it enormously. I remember when the first drum machines appeared. The intelligent drummers learned how to programme them and stayed busy. The lazy drummers didn’t bother and stopped working. Then computers arrived and for the first time it was possible to make recordings without having to go to expensive studios and hire musicians like me who could get it right first time. I’ve always embraced technology and it has been my salvation.

What is a good way for a guitarist looking to become a session player to start off?

Do anything you’re invited to do: you never know what it will lead to. Learn how to copy sounds and styles quickly. Most importantly, learn to play the song, not your instrument. Next time you are asked to play on a song, ask for a lyric sheet and put your instrument down. Listen to the song and read the lyrics. If the lyrics are about a sad story, think about how you are going to emphasize that emotion. Best trick is to learn the song and sing it to yourself in your mind as you play it. This means you will automatically play things which support the vocal. 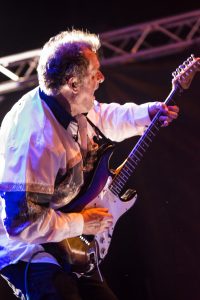 Which is the most memorable experience of your musical journey so far?

Playing on the stage at Madison Square Gardens. One of my favourite albums when I was learning the guitar was the Rolling Stones “Get Yer Ya-Yas Out” which was recorded there. It was an honour and privilege to play the venue when I was touring with Roger Waters in the 1980s.

What are you working on currently?

I’m mostly writing and producing library music. Also preparing for some shows with Grammy-nominated arranger Robin A. Smith, some of which will be just the two of us playing our own compositions, and others will be playing the Tubular Bells 50th anniversary arrangement which Robin did and we performed last August at the Festival Hall in London.

Is there anything you still like to experiment with in music?