“Georgi is the 1st guitar tutor I met in Bulgaria since moving back in 2019. We met at a blues jam session and I really liked the way he managed to weave beautiful melodies into his improvising and get lovely tones from his instrument. I was also impressed that he put the effort in bringing all sorts of effects to a jam session, some of which I have been eyeing up for quite a while (like the Big Sky from Strymon). We continued chatting on social media and I found out that he has a very similar approach to teaching as me. So, I immediately decided that he’d have some very valuable advice to share with you! Read more about him below.” – Neli

How did you get into guitar?

I was 14 years old when something made me say to my mother: “I want you to sign me up for guitar lessons!”. It was very sudden, I don’t even know where it came from. The answer was that they would do it, but I had to fix my grades at school – and I agreed. However, I really got into it when my music teacher at school gathered us in the school hall and played Asturias by Isaac Albeniz for us on his classical guitar. I had never heard such an incredible sound and was speechless. Then he told us that we could take guitar lessons with him, and I was the first one to sign up.

I attended classes with him for a year, but we only studied classical guitar. This is a common practice in Bulgaria, which I do not consider good, given that everyone wants to play something different. However, I never waited for the lessons to come – all the time I was trying things by myself, digging on the Internet for information and spending 6 hours a day practicing. This way I progressed a lot.

With years of experience as a guitarist and guitar teacher, how do you take care of constantly developing your guitar skills?

I like for things to happen gradually and naturally – for example, I learn a new chord and think about how to apply it. In general, at this stage I am at the point where I am refining my phrasing more and upgrading my improvisation skills so that I can naturally push an improvisation forward to tell a story – this is the main thing I am working on. Things happen quite naturally because of my inner desire to learn new things.

Also while working with students, sometimes new ideas come to my mind on how to teach better – such as how to explain things like chords and strumming more clearly. I’ve been asked a lot of cool questions that made me realize I can do something better. This is a great way to grow because you also get feedback. 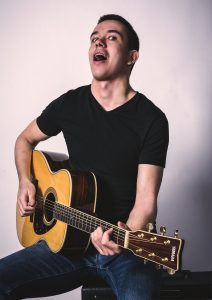 What do you wish you knew about the guitar before you started learning it?

It would have been great if I knew that playing by notation is not necessary at all. Classical guitar and playing songs have nothing in common, the instrument is different. The classical guitar has a very wide fretboard and it is not convenient to play songs or solos on it. The acoustic guitar, which is closest to the classical one, has a more narrow fingerboard and metal strings. Everything sounds great and natural on an acoustic. With the electric ones, you can get so many variations of the sound, which is also great. I wish I had come across a teacher who had pushed me in that direction initially.

Another thing is, it would have been nice to know a little more theory in the beginning. I studied the theory all by myself – for all these years since I’ve been involved in music, I haven’t found anyone to explain it to me in a good way. I figured out things by myself through a lot of trials and errors. If the theory is brought into a framework and shown through clear examples of what, how and why – it is not that difficult. How to think, how to change voicings, how to serve the song – today I teach these things because it seems like not enough is said about them.

What are some realistic goals that a beginner guitarist should set for themselves?

I think you have to start with the attitude – to be patient. It’s strictly individual for everyone, but playing the guitar takes time – you can’t play any song perfectly in a month. Even if you learn the chords correctly, then you have to fix the right hand, the dynamics, the tempo and many other factors.

A good goal is to learn most of the main chords in the 1st [classical] position in a month or two – like C major, G major, A minor, etc. This again depends – some people will find it easier to start with a scale like the pentatonic, since it is easy to remember because of the serious logic behind it.

Another important thing for beginners is the placement of both hands, to control the right hand and the pick well and not to hit too hard. These are some things that are important to master properly in the beginning.

In addition to teaching guitar, you also work as a session musician. How does a typical session of yours go?

It all starts with a long conversation in which we specify how exactly the record should sound and I offer different options. I’m also a pianist, so if the record is to include a piano, we clarify that as well. I try to nail down the nuance that is being pursued. I try out different ideas, from which in the end remains the best one, which I send. If they don’t like it – I try another one. The main thing is that I try to serve the song. The technical part is not a problem, because I know how to make the recording in the right way with a timbre that suits the song and complements it.

What can we find on your YouTube channel, or maybe expect soon?

I started developing my YouTube channel last December. I decided that this was a natural step for me, because in addition to working with audio, I also work on video production. A friend of mine made me try it and it dawned on me that it was something I could do. I am extremely pleased with the quality and the information I manage to convey.

My channel is focused on everything music. It contains many guitar lessons on topics that no one seems to talk about on the Internet. I also alanyse songs, which is something new for me, and I really enjoy it. I think this is a very cool format. I am also trying to create a catalog with chords of Bulgarian songs. For example, many people want to play D2 songs (a Bulgarian band), but there are no videos on how to play a song of theirs, which I want to change.

How do you choose the themes on which you create YouTube videos?

There are questions that I asked myself as a beginner and I did not find the answers – by this logic I make a lot of the videos. I pick the topics based on things which were missing from my own knowledge back when I was a beginner. But also it depends on what I am interested in on the week I’m recording. There are some weeks when I play the piano more and others, when I am mostly on the guitar.

It is important for me that my content is in Bulgarian – my goal is to make videos for the Bulgarian audience, which give a good feeling and teach something without unnecessary information. 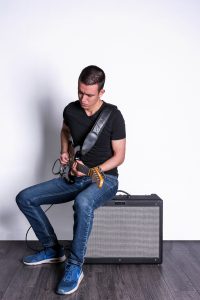 What is your dream music project?

I have been working on it for over a year – my debut solo album, which will include 10 original songs. We are already halfway through – 5 of the songs are ready for recording, and for the other 5 we are working on the lyrics. It will be muso oriented with real instruments, analog sound and songs that I hope will not have an expiration date. I think it will turn out great. I’ve been wanting to do it for a long time and I’m getting closer to the goal of releasing the album. I am very glad that I have found great musicians with whom to bring it to life. I am the main producer, arranger, guitarist and pianist for the project. I try to make it by the American standards – like John Mayer, Bruno Mars, Charlie Puth, Michael Jackson. I hope to be able to do it on the same level and create music for the soul that resonates with people. I hope to have concerts to which fans of my music come. This is the greatest recognition for a performer – someone to set aside money and time to come and watch you.