“Here’s another person I met through social media. Although we went to the same music university, I actually never met him in person! BUT I love listening to the music he’s released, what he’s doing with his guitar teaching and general posts as well 🙂 They bring a smile to my face. So here’s some interesting and fun thoughts from him:” – Neli

How would you describe your journey as a musician so far – where it started and how you got to where you are now?

I fell in love with music around the age of 12 – I just suddenly noticed it, having really not noticed it before. I suddenly became interested in the music my older sister was listening to, which was The Smiths and U2. I also started watching TV shows like The Chart Show and Top of the Pops and deliberately took interest in what I like and what I do not.

Quickly I became interested in the guitar. I didn’t imagine myself as a drummer, a bass or keyboard player or a singer. It was pretty much guitarist right from the start. I started growing my hair all the way down to my belly button and wanted to play a Fender Stratocaster shaped guitar. My early heroes were people like Randy Rhoads, Jake E. Lee and Tony Iommi. Later on there were Jimi Hendrix, Jimmy Page and Stevie Ray Vaughan. Going into my 20s and 30s I still loved those guitarists but also Dave Gilmore and Mark Knopfler.

Nowadays I make a living as a guitar teacher, which has been difficult in the last couple of years because of the pandemic. I busk – sometimes on the street, sometimes on twitch and sometimes at events at different locations. I’ve just been accepted to the scheme of the busking in the London underground so that should be interesting. 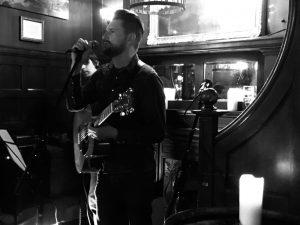 What is a piece of advice you wish you had gotten at the beginning of your career?

I can think of a few answers immediately, but I should also point out the problem I would have had – I didn’t take advice very well. Maybe I would have taken advice from a musician that had a good career, but I didn’t know any of those. I tended to get advice that I didn’t want to hear from my parents.

The advice I wish I had heard, truly understood and taken to heart when I was a teenager learning to play the guitar would be: open your mind to different types of music. I wish I exposed myself to more genres in those early years and not focus only on heavy metal as I did.

And the second one: open your mind also to music theory. I didn’t really take interest in music theory until my 30s when I started teaching. It has improved my playing, improvising and composition so much. I wish I had hit the books and learned music theory right from the start.

You recently released your EP When She Laughs. How did it come together?

When She Laughs is a song I wrote in 2017 and carried on crafting it in 2018. Then the same year I handed it in as part of my portfolio for my degree in songwriting at ICMP. But that was an acoustic version and I decided to record a full band version of the track.

I started tinkering around putting more instruments and then I thought I also want a pedal steel in there – that is when it suddenly took shape. I went on fiverr and found a pedal steel player who did amazingly – you can hear him on the finished version. Listening to the pedal steel with my acoustic guitar and vocals made me realize what shape I really wanted the song to take in terms of instruments. So I put a twelve string acoustic guitar as well, a little bit of mandolin and ukulele and lots of backing vocals. While I was doing this I had MIDI drums in there and wasn’t satisfied with them. I went back on fiverr, found a drummer and he also did an amazing job. It is all authentic in there, it is all real.

I hadn’t had any music released in years, I wasn’t trying to make progress as an artist who does original material and I thought it is time to change that. So I put together the song, the acoustic version and a few other versions, as well as my single from 2018 New York Times, and released the EP. 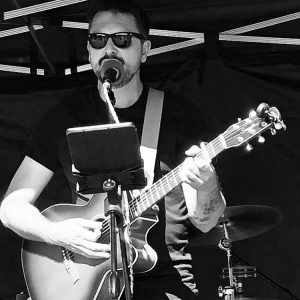 In a video you recently shared, we can see you busking in London. Can you share some tips for young guitarists that would like to try busking?

Tip №1: Get yourself an iZettle card reader, because most people are not carrying cash these days.

Tip №2: If you can’t remember lyrics like me, then get yourself an iPad and the iRig page turner. The iRig clamp is fantastic for clamping your iPad to a mike stand. Get also a Bluetooth page turner so that you can turn the pages with your feet, while playing the guitar.

Tip №3: Just get out there and do it! I wish I had started earlier.

What is a memorable experience you had as a busker?

A few years back I was sort of tinkering with the idea of busking without really committing to it. One day I took my ukulele and my Roland Cube Street amp and sat on one of the benches near the Turnham Green tube station and played the ukulele. Someone recorded a video of me and posted it on twitter. It got seen by lots of people who do urban renewal projects in Chiswick, it got retweeted and seen by the local member of parliament for Hounslow. Then she retweeted it and suddenly a video of me went – well  not exactly viral – but viral in the Chiswick area which is nice for me, since it is where I live.

As a consequence I got invited to play at a street party. Until that point, I had avoided singing live but I decided to go for it and that led to another gig and ultimately to me busking.

In addition to gigging and writing music, you also teach guitar. What is something you learned about the guitar from the perspective of a teacher?

I have probably learned more about the guitar from the perspective of a teacher than I ever did as a student. Different people have different ways of thinking about things. You can explain a technique or a theory concept to someone and they might not get it. So you must find another way of explaining it until it clicks. Then someone else comes and you try the same explanation and it doesn’t work. So you find another way of explaining. Having to find different ways to explain the same thing puts you in a position of having to truly understand the concept from every direction.

And what is something you insist on your students knowing?

Fretboard knowledge! Where exactly the notes are. That is something a lot of guitarists are happy to avoid. Without that knowledge, they cannot possibly learn the relationship that the notes have with each other, which is basically what music theory is. That is one of the ultimate aims – to know how something is going to sound like a fraction of a second before you play it.

I would love to record an album of my own songs with talented musicians in Nashville. That would be amazing, but I should say I would only feel comfortable doing that if I wrote 10 new songs that are better than any song I have written so far.