“Meet someone very dear to me. Someone who made moving from the small country of Bulgaria to busy massive London a much more pleasurable experience. The 1st musically like-minded person I met in the UK and the person with whom I shared my 1st ever band performance on stage – Alex Farry! A very intelligent and technical guitarist who was my motivation to keep improving through the 1st year at uni. He has done a lot of varied projects in music and if you’re curious about what the band we did together was like, you can check out this gem from the distant 2013:” – Neli

How did your musical journey start?

I’d always had an interest in music, which I think I inherited from my dad. He was always entertaining guests playing piano or guitar and singing, generally the same three songs. I had guitar and piano lessons but my teachers were unreliable and I never really made any progress until I was 13 and decided to teach myself. I took out my old acoustic ¾ length and looked up the tabs to Californication by the Red Hot Chilli Peppers and never looked back.

You were a part of several original bands. Do you still write music?

I loved the writing process for my original bands, particularly when you find someone you connect with on a musical level, I still go back and listen to some of those songs now! I’ve definitely put writing on the back burner recently to focus on self-improvement, both on the guitar and on the computer. My time has instead been spent learning new music and techniques and exploring the music tech side of things, and once I feel more confident with them I can go back to the more creative side of things.

What is something one should look out for when writing prog music?

Find your voice and write for the song. The diversity of progressive music has led to bands with incredibly distinct styles which ironically makes it easy to be over influenced by them. There are many artists out there effectively trying to write the next Dream Theater song, and I have absolutely been guilty of being one of them. Draw from these influences but think outside the box. 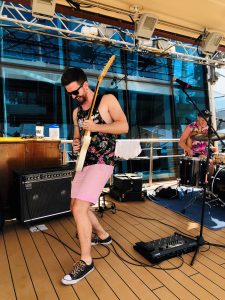 Can you share an interesting story from when you were playing on cruise ships?

The playing was usually the least interesting bit! Getting to see the world definitely outshines playing the Beatles for 10 OAPs at 5:30 in the evening. One funny moment though was when we were playing a set on Halloween one year. Everything was fairly normal until these two guests wearing those big T Rex costumes with the giant floppy heads started running through the venue we were playing. We all ended up laughing so hard we had to stop the song!

What is a thing about being in a functions band you wish you knew when you were first starting?


Particularly for a cruise ship band that plays three times a day with only one day off every fortnight, you can never have too many songs! And make sure you all enjoy the songs at least somewhat. There are many songs we all dread to play now and it can make those boring early afternoon sets feel much longer.

What equipment do you use for your varied projects?

My two main guitars are a Fender Strat and an Ibanez Jem 7V. The Strat for the serious stuff and the Jem for the fun stuff. I also use a Line 6 Helix LT for effects. I don’t think anything beats analogue pedals but for ease of use and transport the Helix is perfect for a cruise ship guitarist.

For a brief period of time you were doing uke covers of pop punk tunes. Are you planning on playing ukulele more?

After a while the ukulele became too powerful for me and I’m going through a deep and lengthy process of recovery and training to face the instrument again.

How do you practice to make sure you keep improving your technique and guitar skills?

I have a super short attention span so playing unmusical drills and patterns is my worst nightmare. I usually just find a part in a song that I want to learn that revolves around certain techniques, whether it’s alternate picking, sweeping, tapping etc, and break it down to learn it. Once I have the notes I’ll take the song into Audacity and slow it right down. Once I can play it clean at a certain tempo I’ll speed it up until I’m back at the proper tempo. Super basic but I enjoy the satisfaction of being able to play along to something I struggled with before.

Either have my own prog metal band or become Lady Gaga’s touring guitarist.