“Meet the man who many thought was my brother through our Higher Diploma course as I met him – The Count! Later I learned that he also had a normal human name – Joseph 😀 He’s an awesome guitarist with lots of pizzazz who has created awesome rock and metal shred instrumentals and also released an acoustic track recently. A multiinstrumentalist, teacher, composer… read more about his music journey below.” – Neli

How did your music journey begin?

I started playing when I was 15. I was inspired by the guitarist John 5, of Marilyn Manson and Rob Zombie, but it was his solo work that really inspired me. He has a great command of the instrument and seems to be able to play a huge range of styles. I certainly never intended it to become my career choice, but I instantly got hooked! I was lucky to have a lot of excellent teachers who inspired me to work hard.

What is the story behind your stage name The Count?

I wish there was a better story for this! Two huge influences were Alice Cooper and Marilyn Manson so I thought if I was going to be a musician I needed a stage name as well! I was watching ‘Dracula’ and just thought ’The Count, that’ll do!’ I’d love to tell you that I’m a real Count living in a castle in Transylvania but sadly not!

To some extent, yes. The highly theatrical performers I mentioned above certainly inspired that. Jimi Hendrix is also a big fashion influence, I have a replica of his iconic military jacket. I think being a musician gives you permission to be a little more flamboyant!

You have obtained multiple qualifications in Guitar. What advice would you give to an aspiring guitarist, who is wondering whether to pursue music as a formal education?

It’s a difficult one. I am glad I did all the qualifications as it made me learn things I wouldn’t have looked at otherwise and some of the teachers I had were extremely inspiring. However not all music courses are created equal, some of them do more essay writing and music business which is fine if that’s what you’re after, but they won’t help you get better at your instrument. It’s worth looking through a course’s curriculum before committing yourself to anything.

In addition to guitar, you have also mastered the sitar, piano and mandolin. Is learning a second instrument easier than the first or is it confusing?

Certainly a lot easier! Particularly with the stringed instruments, the mandolin requires the same technique as guitar, just on a smaller scale. I think with piano, though it has very little in common with the guitar, I still had a head start when it came to finger dexterity and the fact I could already read music. It’s worth saying I don’t dedicate equal time to all of them. Guitar and piano certainly get more focus than the others.

Do you plan on learning other instruments?

I bought a banjo over lockdown as something to do which is a lot of fun! I don’t currently have any plans to learn another one, there’s only so many hours in the day! It’s always interesting to try out different instruments, I learn a lot I can then apply to the guitar, it’s a great way of breaking away from familiar patterns.

So far you have produced one album “More is More” and one EP “Aqua Hands”. How does your writing process go?

Very slowly! It’s often several months from the initial idea of a song to the completion. A lot of the material for Aqua Hands was actually written away from the guitar. A lot of the guitar solos were inspired by classical piano music by composers like Liszt and Chopin. I have a huge library of sheet music and often I’d take a pattern from something they’d written and reworked it to suit the song. After I got a sound I liked I’d then try and work out how to play it on guitar. Most of the time this was extremely difficult as the patterns don’t suit the guitar’s tuning at all. Sometimes a few seconds of music could take me weeks to practice. Though it’s a difficult, and often very frustrating process, it creates idea’s I’d never come up with if I only wrote while sitting with the guitar. It’s very easy to get stuck in familiar patterns.

What changed in your style and creative process between the two projects?

The two projects were done 5 years apart, so quite a lot! ‘More is More’ is my first attempt at writing music, so I was still trying out a lot of things. Everything was recorded with my friend and former guitar teacher Sam McCune at his home studio ’Skull Sound Studios.’ He mixed and mastered the whole thing. I learned a lot while doing it, some of the tracks are not the sort of thing I’d write now, but I think that’s all part of the process. He certainly helped me to understand what works and it was a great experience. 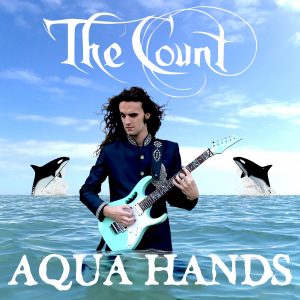 When it came to Aqua Hands I had my own recording set up so everything was done from home. My friend A-Siege then beefed up the production, we added lots of orchestration and had a lot of fun seeing how over the top we could make the tracks! Some of them turned out quite differently to how they were originally written. The song ‘Riptide’ was intended to be a straight ahead rock song but it ended up as a synth filled, Van Halen style track! It probably ended up being my favourite track on the EP. It’s sometimes good to suggest some different ideas, it can produce some great results!

The track “Stringkiller” from your first album features a guest appearance from television legend Bill Oddie. How did that come around?
Bill is a good friend of my dad’s, and I’ve met him a few times. I know he’s a big fan of classic rock music and thought it’d be fun to bring a bit of a comedy edge to it! He was very pleased to be involved which was great as it made the track into something unique, and added some much needed humour. His part was actually recorded by my Dad at a charity event in a hallway!

Is there something you’d like to experiment with in music, but haven’t had the opportunity yet?

I think I’d like to learn orchestration to a better extent and perhaps try writing music for instruments other than the guitar. I’ve started branching out with the track ‘Lotus’ from Aqua Hands, which was written for the sitar. They’ll also be two solo piano pieces on my next EP.

Due to the pandemic The Count has had a lot of time to work on several projects of his own. The song ‘Roswell’s Night Out’ with Dannyjoe Carter from Las Vegas – that includes plenty of high-speed shredding and showing off – is now out.

On the other end of the spectrum, he has also written another EP with two finger-style guitar pieces and two piano pieces which show a new side of his work. And he also released a brand new EP with the band The Jupiter Gallery. Follow him on social media and check it all out!