“The most fun I had playing gigs thus far has been when I was the guitarist for UK’s Tool tribute band. They just had the best audiences! But the person who was our singer and organiser of all sorts of things at the time – Andy Vozza – is one of many talents and projects. He has been all around the London urban rock scene and I thought he’d have some very interesting stories to share.” – Neli

What were you like when you were first starting on the guitar?

When I started playing the guitar, I was a chubby insecure Italian kid with a lot of negative thoughts. Learning how to play was great therapy for me because while everyone was into football, I had my own thing back then.

What is a solo technique you’d recommend for a new guitarist?

Practicing slowly with the metronome. It’s not a technique, but it opens all doors to any technique you are interested in. I love the legato, because of its fluent sound. 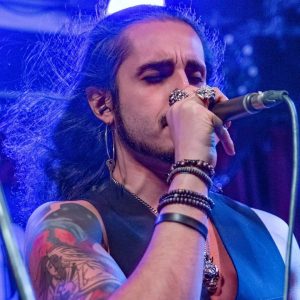 You recently released an EP. What does it represent?

How was Elyn created?

The idea of Elyn was born after a gig gone bad in India. 4 songs into the set and the speaker tower on my side of the stage collapsed because the crowd kept pushing the security, which eventually made them lose balance and fall. When I went back to London, I started setting things up. My plans for the future are to market it a bit harder as soon as lockdown is over and perhaps attempt a European tour.

What is your process for writing music?

I write lyrics first, with no melody or chord progression in mind. I do this because otherwise, I feel limited in writing lyrics when the music is ready. 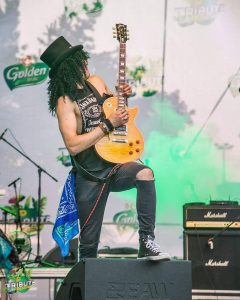 You play as Slash in a Guns ‘N’ Roses tribute band. How did that come around?

How does it affect you being constantly compared to a legend?

I take things professionally. That was my source of income back then. I enjoyed playing with the band and I treasure their friendship.

In your line of work have you encountered the “rockstar attitude” phenomenon?

Is my fashion style unique? I guess Bowie and Prince are the biggest inspirations on that.

I wanna bring my band Elyn to the spotlight.

What is your most precious memory of playing the guitar?

Hmmm, there are so many. Probably that time when in university I played a song by the band Extreme and Charlie Griffith from Haken said that was as close as it gets to Nuno Bettencourt. Being compared to one of my idols from a guitar legend was priceless.