“Ooooh! What a cool blue guitar! Is that a PRS?” – were my thoughts when I first saw Claire on stage at a uni jam session in London. She seemed both confident and in her own music world on stage and I loved that! Even though we weren’t in the same years at uni, I got to know her better through the years and she has been a very nice person to talk to. I know she has been keeping so busy with so many bands – original, cover bands, doing gigs and tours… and what not?! During our recent chat, she told me that she has been focused on recording her amp and working on her new guitar sounds, but also she has been releasing quite a few videos on YouTube. Such a versatile guitarist definitely has some useful info and insight to share with you 🙂 “– Neli

What made you become a rock musician?

Firstly, music was a given in my life – I have always loved hearing music around me. My parents are also musicians – my dad plays the guitar and my mom is a piano player, so I was always surrounded by a lot of music at home. When I was 8 or 9 years old, I discovered the electric guitar and fell in love also with the music that goes along with it – which is mostly rock and blues. I actually remember the exact moment I decided I want to be a rock musician specifically – I was studying at ICMP London and every week we had to perform a song together with the other students. We were playing a song by the band Extreme, because that week the genre was rock music. That was the first time I performed a heavy rock song loud on the stage with other musicians and the feeling that I got that day… I got addicted to it! That was the moment I decided this is what I want to do.

What’s a tip for achieving a great rock sound?

What I found important is to have gear that is sensitive to what you are playing – which means having a lot of more modern amps, not necessarily all of them but some of them. When you play on them, you as the player cannot really hear – the sound is very compressed and so the amp is not going to respond really well to the different dynamics when you play. So I like using (specifically for guitar amps) amps that are very punchy and responsive, meaning that you can easily control the amount of distortion just by the way you play. Because no matter what volume you play, some modern amps are not responsive enough to the dynamics of the player. I was using a Marshall amp previously, but now I am using Invaders Amplification and the amp I have now is perfect for rock – very responsive and punchy.

How do you create your own unique sound?

What I believe makes people unique weirdly is not trying to develop something that has never been done before completely. The key is actually in that to just to take a look at your influences – guitarists, bands and just any aspect of the guitar you like sound wise, technique wise or whatever – and just take that and apply it to your playing. If you get inspiration only from one guitarist or one style of music – you are going to end up sounding like a copy of someone else. To find your own sound you need different influences. Take the best out of every musician you are influenced by and eventually this mixture is going to sound like you. So even if at first you copied aspects of other musicians, the secret is to copy not only a few people, but a lot of people and not to take everything from them – just what you prefer. It takes time but a cocktail of influences is how you achieve your own unique sound. 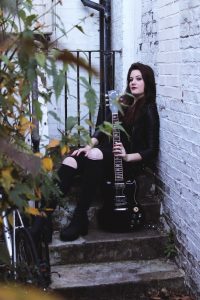 What are your tips for recording your playing?

I am glad you are asking because recently I have been upgrading my skills in recording. That is because I got my new amp and it is the best one I have owned ever, so I need to match how good it sounds live to how good of a sound I can get when it is being recorded. So a great tip I have for everyone who is recording or trying to record a tube amp at home is to get a load box instead of trying to use the traditional way to record an amp which is mic-ing the cab you have. I am now using a program that simulates a guitar cab, so I am recording my tube head and it goes straight to the load box and then into the computer and the cab and the mic-ing system are being simulated directly into my computer. This is amazing because you can record yourself silently, which is great because when you want to record a tube amp, you usually have to crank it, because otherwise your amp is not giving a 100%. Which is fine in a studio, but at home it is not always possible. I actually got this tip from a friend who works in a studio. I actually have a demo of the sound I was able to get this way – you can listen to it here.

What is a technique you would recommend to aspiring rock musicians?

Don’t try to copy anyone else. If you see another musician using a specific technique, don’t feel like you have to nail it yourself. Learning how to play the guitar is endless – there are so many techniques. In my opinion, you should work only on the stuff that you want to implement in your own playing or songwriting or need artistically. For example if you want to be a great blues player you probably don’t need to work on your alternate picking and go really fast. Nowadays especially, it is very hard because you see what everyone else is doing on social media and it is very easy to think that if a certain person is succeeding by playing in a certain way, you also have to do the same. Thinking this way is a waste of time – you should spend your time working on what you actually want to play. If you chase after success by doing what works for other people, eventually you are not going to be yourself, which is not going to work for the long run. And this is a long run game. 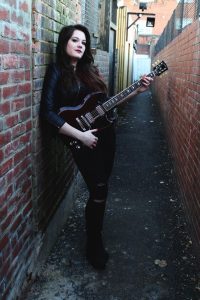 What is your formula for a great solo?

What I try to do when I write a solo is to try to make the solo section like a song into the song. I like when solos have a structure like you would have in a song. If I write a solo on someone else’s song or an already written backing track – I always follow the dynamics of the track I am working with. When you create tension – and there are many ways to create tension for a solo – but one of the ways I use is adding speed. So I play faster whenever I want to create tension. In case I am writing the backing track or it is one of my tracks I like to write the harmony behind the solo already with the solo in mind. Having a solo is also a great way to prepare the listener for a transition. So when creating a solo it depends on where your starting point is and how much creativity you can have, depending on for who you are writing. A great solo in my view is one that serves the song and can convey the emotion you want it to. After all, the heart of the craft of playing a guitar and writing solos is to be able to know what technique or sound to use in order to evoke a particular emotion in the listener.

How do you approach collaborating with other musicians?

Collaboration especially online is something I love doing. I love the fact that now it is so easy to collaborate with people from all over the world and I have been doing it a lot this year, since the live music industry is taking a little break now. Hopefully not for long. This year I recorded things for people in Israel, Switzerland, London, America and so on and it is great. About my approach – it is good to be clear from the start about what you expect from each other. I love it when everyone can add their creative input, but depending on the project it can vary a lot. I believe creating music with other musicians is the most essential thing even if you are a solo artist, because you still are going to work with session musicians, producers and others. It is also a great learning experience so I do it as much as possible.

What is a thing you’d like to experiment with in music?

One thing I always wanted to experiment with and 2020 gave me the chance to – because obviously my schedule cleared up quite a bit – is to try writing also for other instruments. Up to until a few months ago I wrote almost exclusively for guitar, which makes sense since I am a guitarist, but I always wanted to write also for drums, bass and keyboard. I also recently bought a bass so that I can write on the guitar and I am happy that now I have the time to do it. It helps massively if you know your way around the drums or other instruments so that you can communicate with other musicians and know exactly what you want. So I would recommend to learn also instruments that you are in contact a lot for the ease of communication with other people. Currently I want to be able to create a full instrumental song myself.

Claire is now in the process of recording videos for her YouTube with playing and rig rundowns, so you can expect a lot more new stuff on her channel. She is still working with the bands she was working with before the pandemic and also has a special project in the making with a mystery band – in the next few months she will reveal it so stay tuned! She is also currently moving to another city great for music somewhere in Europe. Make a guess and follow her on her social media channels to see if you were right: