The first time experiencing jazz music can be overwhelming for any listener. Its structure is typically more complex than the other popular forms of music we are used to. Jazz is of an improvised nature – it consists of multiple melodies and rhythms working together – which can be hard to follow for listeners accustomed to more structured, predictable forms of music. Exactly the things that make jazz difficult to appreciate at first though, keep listeners interested for the long run.

The number of musicians in a Jazz ensemble can vary all the way from two to 20 players. Besides size, they also range in style and instrumentation. But they all have three basic elements in common: improvisation, syncopation and blue notes.

Improvisation is the heart of jazz. It happens when a player follows a moment of inspiration into unwritten territory, and composes while playing. Improvising takes a great amount of skill, a good ear and a lot of focus. Another thing it requires is willingness to experiment, so it’s never too early to start! Improvisation allows communication between players known as a call-and-response pattern. It starts when a soloist, singing or playing, issues a “call” and the other participants sing or play back a “response.” It’s a fun way to improvise and get involved with other band members, especially when you’re jamming.

Syncopation refers to shifting the emphasis of a song’s rhythm, or beat pattern, to weak or unaccented beats and notes. Skilled musicians can syncopate smaller denominations of notes, dividing the offbeats into eighths and 16th notes in the beats. Syncopation appears in jazz when two rhythms are played against each other. This is also a feature that appears in latin-style music and a lot of dance music. And this is where jazz gets its swing, which makes listeners want to tap their feet or dance. Not to be mistaken with swung notes, which actually mean to change the length of notes, holding some longer and making others shorter.

Blue notes occur when a musician plays or slides through a scale, flattening some of the notes (playing them a half-step lower than expected). A blues scale is a minor pentatonic scale with an added flat 5 (or a tritone, or the so called blue note) This for example is how the A minor pentatonic scale: A C D E G turns into the A blues scale: A C D E♭ E G. 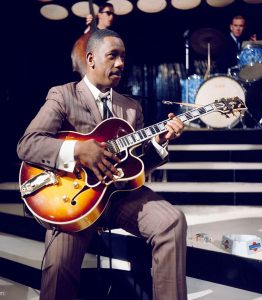 However you approach listening to jazz, it’s best not to try to take it all in at once. Focus on one thing at a time. In jazz often times you don’t just use the one scale for a whole song. It is possible, but often times notes that are outside of it are added. That is because most jazz songs have chords that don’t just fit in one scale. So what people often use instead of scales when playing jazz is arpeggios. Another possibility is to use the scale that best fits the song and some chromatic notes around it. If we dive even deeper, Sometimes instead of the Natural Major or Minor scale, a jazz song revolves around the modes of the major scale – Ionian, Dorian, Phrygian, Lydian, Mixolydian, Aeolian, Locrian, so let us know if you’d like more information on that topic.

If you want to be able to play jazz music – take your time. When learning improvisation people often draw parallels with learning a foreign language. New words, phrases, and grammar make it possible to communicate in a new environment. Improvisation is very much the same: as you learn patterns, licks, chord shapes, different tonalities, sequences, and harmonies, you gain more flexibility and fluency in your improvisation. And also you start creating your own patterns and style – which is the whole point of jazz being so free.

Read more about jazz and its’ history HERE and join Neli’s Guitar Family for FREE guitar tips, exercises and lessons HERE. You can also have a listen to a Wes Montgomery cover Neli did before she went to music Uni HERE!